An elephant never forgets, so the saying goes. And neither does blockchain.

Memory is at the heart of blockchain, a groundbreaking computer programming language structured, in key ways, very much like the mind. Just as our memories link together by virtue of associations—the flavor of chicken soup may evoke memories of being cared for as a child, for instance, or a perfume’s fragrance may bring to mind a past love—so is every “block” of code in a “chain” of transactions inextricably linked to the block before it.

And like the proverbial elephant, blockchain’s memory is infallible. Because each new block incorporates a “hash,” or line of code, from the previous block, and because each block must be authenticated before it can be added, altering the chain is impossible. A transaction can be reversed with a subsequent entry—accepting returned money after sending it to someone, for instance—but it cannot be tampered with, even by the person who originated the transaction.

The more transactions in a blockchain, the more memory it uses. Cryptocurrency “miners” authenticate new transactions and search for unique hashes to assign to them, encrypting and compressing each entry, keeping the chain secure and authentic. These tasks are critical in the absence of a mediator such as a financial institution to oversee the ledger. To do their work, miners need plenty of available computer memory and fast processing speeds.

As blockchains grow in length and complexity, how, in a virtual world where nothing is forgotten, will the technology live up to its incredible potential without continual advances in memory, storage, and processing power?

This question is important, because blockchain has definitely arrived. Very soon, it could form the basis for all our digital transactions, including some that we have not yet imagined. Already, developers are writing blockchain-based apps. Businesses are using the technology.  So are consumers who buy and sell cryptocurrencies such as bitcoin—and many more uses are coming soon.

Blockchain will almost certainly transform what we can do with our computing devices, in business and in daily life—as long as we have the infrastructure in place to support it. Ample computer memory will be key, especially for the devices, or “nodes,” used to authenticate transactions. Then, even if we as humans forget something we’ve entrusted to its ledger, we can rest assured that the blockchain will not forget.

The kinds of tasks we perform on our digital devices can be divided into two categories: transactional and non-transactional. Writing emails, watching videos, and browsing the internet are largely non-transactional, meaning we haven’t purchased or sold anything or made any contractual agreements. Increasingly, though, we are conducting transactions online, such as signing contracts, making reservations, and purchasing items.

The internet already processes these transactions more quickly than we could have conducted them during pre-digital “analog” times. Not long ago, we had to go to a store or make a phone call to buy something, and pay with cash, a credit card, or a check. (Remember checks?) To sign a contract, we once had to wait for paper documents to arrive in the mail, sign them, and return them in the mail.

Digital transactions are far faster and more convenient, but they can be insecure, allowing cybercriminals into our accounts or giving them access to our Social Security numbers and other sensitive information. And most of today’s transactions still require a third party such as a bank, credit card company, attorney, or real estate company to process them. Not so with blockchain.

Blockchain is designed to work as a kind of virtual public ledger, available for all to see and written in indelible ink. Each block is a file, with a new one created every 10 minutes, containing a record of all the transactions that came before it, listed in order and ending with the new transaction.

Speaking in digital terms, a blockchain is a distributed database, meaning it is neither created, augmented, nor stored on a central processor. Instead, every computer, or “node,” used to process and authenticate transactions has a copy. When a transaction gets added, all the copies change simultaneously.

Just as an analog ledger often includes the date and possibly even the time of each entry, each block in the chain has a time stamp, so that everyone can see when it was added. It also includes a cryptographic signature, called a “hash,” that compresses the block and encrypts it.

Users get access to their transactions with a private code or “key” that is so secret that not even the system issuing the key has a copy. If someone loses their key, they cannot unencrypt their entry or entries, and they lose access to whatever they have stored or recorded there. Misplaced private keys have cost people thousands of dollars in cryptocurrency that will never be retrievable unless they find their key.

A Short History of Blockchain

The virtual money, bitcoin, is the most famous use for blockchain. It is also the technology’s raison d’être. Bitcoin was launched in 2008 with a white paper describing a “purely peer-to-peer version of electronic cash,” authored by a mysterious person or persons using the pseudonym Satoshi Nakamoto (whose identity remains unknown). The world’s first cryptocurrency lingered on the periphery of the public consciousness for years until something very surprising happened.

In 2017, bitcoin captured the public’s imagination with much fanfare and hype when its per-unit value skyrocketed from $1,000 per unit at the start of the year to nearly $20,000 in mid-December—a 2,000 percent increase. The surge stimulated a virtual “gold rush” among new investors as well as established institutional investors, and miners—administrators of the cryptocurrency—snapped up the hardware needed to perform the complex calculations, resulting in shortages.

Although a subsequent plummet in value has calmed the bitcoin frenzy, interest in digital cash appears here to stay. More than 700 “altcoin” currencies are now vying for market share, their investors hoping for a repeat performance of the bitcoin phenomenon. Enabling the processing power behind the cryptocurrency boom: memory. 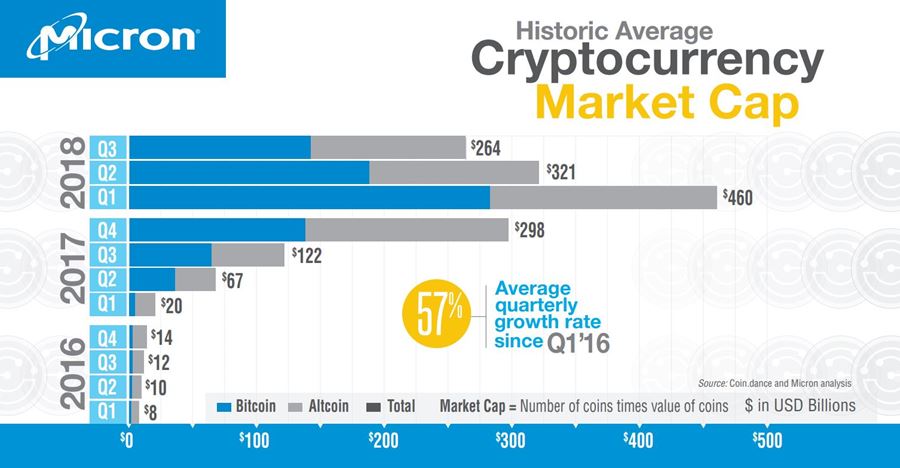 Most people using cryptocurrencies or any other form of blockchain do not need a special processor or additional memory. They are concerned only with their own transaction, which they make using an application or a website.

Miners, however, need access to the entire chain to do their work. At the time this article was being written, the bitcoin chain had 532,698 blocks, a new block was getting added to the chain every 8 minutes and 19 seconds, and the price per coin was nearly $7,500.

Before a block gets added, it must be assigned a unique code, or hash. Finding the correct hash is a complex process using mathematical algorithms only computers can solve. Speed is of the essence: after opening several hundred transactions and bundling them into a block, miners compete to be the first to solve the puzzle. The winning computer gets the reward, which at this writing, is a “nugget” of 12.5 bitcoins per block, or nearly $94,000, plus the fees levied on each transaction in the block.

Getting paid, therefore, requires a superfast computer—and lots of memory. To initiate a block, the software first creates a file that can take up as much as 8 gigabytes. Rapid processing, however, requires a lot of free memory. So to do the heavy lifting required for their work, miners typically use a specialized processing chip (Application-specific integrated circuit or ASIC) designed especially for bitcoin mining. These very specific ASIC’s require a constant feed of data to maximize their problem-solving capabilities, which today is provided by DDR4 DRAM. ASICs are expensive to create and design but several companies have undertaken the task and are mass producing crypto mining machines to sell in the consumer market.

To run, each GPU needs, on average, 7 gigabytes of Graphic Double Data Rate (GDDR) memory, a special kind of computing memory that processes much faster than conventional computing memory. Many miners use several GPUs at once.

Current graphics cards are powered by Micron’s GDDR5 and GDDR5x graphics memory. Next-generation cards will sport Micron’s latest GDDR6 technology, which has shown to be capable of processing up to 20 GB of data per second. GDDR6 was designed for use in many high-bandwidth, speed-hungry applications including graphics, networking, and automotive applications. Miners will surely benefit from the speeds made possible by GDDR6.

Recently released ASIC mining machines are claiming to outperform GPU’s in Ethereum mining as well. What has yet to be seen is if the mining algorithms will be tweaked to give GPU’s their edge back, a common practice for some of the algorithms. An added benefit of GPU mining is that anyone who has invested in a graphics card for gaming already possesses a powerful crypto mining machine without additional hardware investment. One constant remains true for both GPU’s and ASIC miners, they require fast high-bandwidth memory to function.

“We built graphics memory technology basically for gaming and other traditional, high-performance applications,” Micron’s Graphics Business Development Manager Bill Randolph said. “But the use of this memory is also ideal for cryptocurrency mining."

As applications and uses for blockchain continue to grow, so will the demand for computing memory and ever-faster processing speeds.

From the earliest days of bitcoin, Micron technologies have been at the forefront of the blockchain revolution and crypto mining. Our GDDR memory, already preferred by video gamers, has been providing the memory bandwidth and speed that make blockchain technology possible. Micron GDDR6 and other memory technologies will ensure that the blockchain can continue to record, manage, protect our digital transactions—and, perhaps most important, that it will never forget.

A World of Uses

Cryptocurrency is the most widely-known use for the blockchain. But the technology has captured the imagination of developers and innovators as a secure, rapid, peer-to-peer mechanism for moving money and conducting a wide array of transactions, financial and otherwise. Uses include: